Back to List
MG Victor J. MacLaughlin
Class of 1996 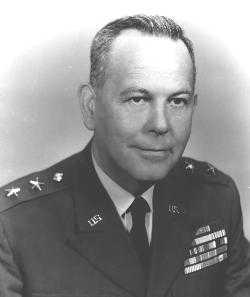 General MacLaughlin was born in New York City on April 11, 1910, and died on March 20, 1989. He graduated from the United States Military Academy and was commissioned a Second Lieutenant of Infantry in 1931. His military education includes attendance at the Naval War College, National War College, Army Supply Management Course, and the Advanced Management Program at Harvard University. He was detailed to the Quartermaster Corps in 1939 on the eve of World War II and was permanently transferred to the Corps at the war’s end.

General MacLaughlin’s last assignment before retirement was as the Commanding General, US Army Quartermaster Center and Fort Lee and Commandant of the Quartermaster School. He was also President of the Quartermaster Foundation for nearly a decade. Earlier assignments include Assistant Director of Plans, Programs and Systems, Headquarters, Defense Supply Agency; Executive Director of the Military General Supply Agency on its establishment and continued as Commander of the organization when it became the Defense General Supply Center. He has also served as Assistant Quartermaster General in the Office of the Quartermaster General in Washington, DC, and as Commanding General of the Schenectady, New York, General Depot. During World War II, General MacLaughlin was awarded the Legion of Merit for his key role in preparing Quartermaster plans for the amphibious invasion of Italy by the Fifth US Army.

General MacLaughlin’s many awards include the Distinguished Service Medal, Legion of Merit and Bronze Star Medal. He also received numerous foreign decorations including the Order of the British Empire, Gold Cross of Merit with Swords of Poland, Czechoslovakia Military Cross, Commander of the Order of the Crown of Italy, and the Italian Cross of Valor.