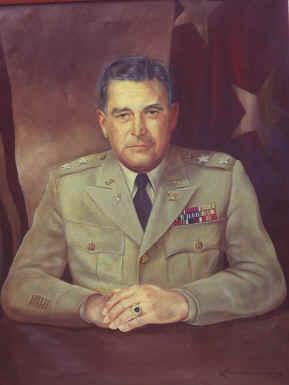 Webster Anderson was born in Boston on June 1, 1906. After graduating from high school in Tecumseh, Michigan in 1924, he was appointed to the U. S. Military Academy and graduated in 1928.

When the US entered World War II, he was serving as Chief of the Defense Aid Branch, Motor Transportation Division, Office of The Quartermaster General. He was responsible for the procurement and supply to the allies of hundreds of millions of dollars’ worth of motor transportation. He earned his first Legion of Merit primarily for work in connection with the ocean shipping of motor vehicles. He developed a knockdown pack a method of shipment and assembly on foreign shore saved hundreds of thousands of shipping tons during the war.

General Anderson was one of the original members of the logistic staff as it was forming in England in June 1942. As Executive Officer with the Motor Transport Division, he became interested in supply and distribution of liquid fuels and lubricants. In August 1942 he joined General Eisenhower’s Allied Force Headquarters in London to plan the fuel supply for the invasion of North Africa. He served with the Petroleum Section of the Allied Force Headquarters in the Mediterranean until January 1945. He was a leader in developing the joint and combined supply system for petroleum products which stemmed from the Army-Navy Petroleum Board in Washington. This eminently successful operation was the forerunner of all joint supply activity during the war and since.

After attending the Army-Navy Staff College in the Spring of 1945, General Anderson joined the Far East Headquarters in Manila. As Area Petroleum Officer for General MacArthur, he planned and executed the fuel supply for the occupation of Japan, Korea, and the China coast. When the demobilization decimated the military personnel capable of operating the military fuel storage and distribution system, he obtained an agreement from the British and American oil companies to form a joint Japanese Oil Supply Company, and he negotiated a contract with them to operate the military storage and distribution system.

While serving as Commanding General of the Quartermaster Depot in Philadelphia in the Spring of 1956, General Anderson was given additional duty as Executive Director for the newly formed Military clothing and Textile Supply Agency. This was a Single Manager agency charged with the supply of clothing and textile items to all four services. In carrying out this complex reorganization, General Anderson lowered operating costs making it profitable for the maximum number of qualified manufacturers to participate in supplying the Government.

General Anderson was nominated by President Kennedy on 14 April 1961 as the Quartermaster General, U. S. Army. His nomination was confirmed by the Senate on 19 May 1961 and he took the oath of office on 12 June 1961.  He served as Quartermaster General until 31 July 1962 when the office was abolished as a result of a reorganization and realignment of the Army’s logistical structure.

Later assignments included assistant to the Army Deputy Chief of Staff for Logistics and as Commander of the Communications Zone, U.S. Army Europe.

Major General Anderson died on January 22, 1992 and is buried at Arlington National Cemetery in Section 30 Site 1170.General Anderson was inducted into the Quartermaster Hall of Fame in 1991.