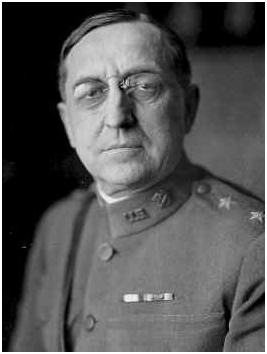 After serving in the Army National Guard, Major General Harry L. Rogers entered the Regular Army in 1898 in the Paymaster Department. When the Paymaster Department merged into the Quartermaster Corps in 1912, MG Rogers continued as Chief of the Quartermaster Finance Division.  Later as Chief Quartermaster of the Southern Division, MG Rogers demonstrated his capabilities by coordinating support to the United States Army efforts along the Mexican border, including an expedition into Mexico.

In 1917, now Brigadier General Rogers became Chief Quartermaster for the new American Expeditionary Force in France.  The challenges were enormous as he was responsible for Quartermaster support to a force reaching almost two million Soldiers in a foreign land, a feat never attempted before.  MG Rogers and his staff literally created the Quartermaster procedures for this war in areas including food preparation, graves registration, field services, depots and supplies, salvage, host nation agreements, redeployment, and a wide range of other issues that enabled the successful operation of the US Army as a distinct fighting force.

Major General Rogers’s contributions to the Quartermaster Corps and to the history of the United States were enormous.  His work set the foundations for modern logistical support and enabled the American Expeditionary Force to operate independently.