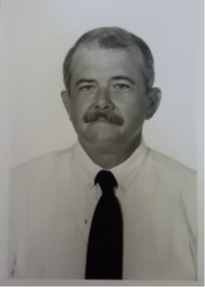 Mr. John T. (Tim) O’Gorman served nearly two decades as Director of the Quartermaster Museum, during which time he not only transformed the structure, nature, and purpose of our beloved museum, he positively affected a generation of Quartermasters (military and civilian) as they passed through Fort Lee, while clearly setting the standard for other Museum Directors across the U.S. Army.

After graduating from college, Mr. O’Gorman served as an Enlisted Soldier with the U.S. Army stationed in Heidelberg, Germany. He later attended graduate school at the University of Idaho, where he earned a Master’s degree in Museum Studies.  He began his career as a Museum Specialist, and over the next three decades served in a variety of capacities, in both civilian and military museums, at home and abroad, with ever increasing levels of responsibility. These included Curator of the Blackhorse Historical Center, 11th Armored Cavalry Regiment; Exhibits Specialist (and later Director) of the Marne Museum, 3rd Infantry Division, and Curator of the Air Defense Artillery Museum, Fort Bliss, Texas.  In early 1993, Mr. O’Gorman arrived at Fort Lee as Director of the US Army Quartermaster Museum, the position he held until his retirement from Federal service in 2011. During his tenure, he directed and successfully passed five Department of Army Certification Inspections for the US Army Quartermaster Museum.  Additionally he directed and successfully passed three American Association of Museums accreditation inspections for the Quartermaster Museum and was named a peer review expert in museums by the American Association of Museums.  His museum acumen taught at least 500,000 Quartermaster Soldiers their history and relevance to the Army and the Nation.

Mr. O’Gorman exhibited the highest level of technical competence, professional aptitude and personal standards within the US Army Museum System.  He co-authored a History of Fort Lee and worked tirelessly to spread knowledge of the Quartermaster Corps’ illustrious history throughout the Tri-Cities with mobile exhibits and a full-blown Museum Education Program. Mr. O’Gorman passed away on 3 August 2017, but his many contributions to the Quartermaster Corps and to Quartermaster Soldiers will live on for many years to come.