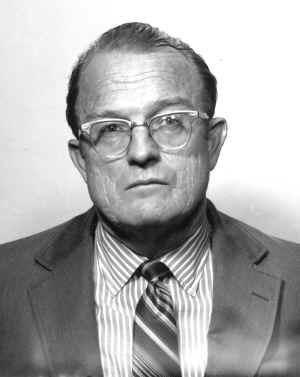 Mr. Smith’s career spanned 45 years of service, both in the military and as a civil service employee. Throughout his career, Smith earned himself the reputation as “Mr. Supply” to the Quartermaster Corps.

His military career began in World War II. He served in Corregidor, was captured by Japanese Army in 1942 and remained a prisoner of war (POW) until 1945. He was honorably discharged from the Army in 1946. His military decorations include the Purple Heart and Bronze Star.

His civil service career began in 1951 at the Department of the Army, Office of the Deputy Chief of Staff for Logistics (DCSLOG) where he remained until his retirement. Smith worked a variety of positions for the DCSLOG, including Statistical Analyst, General Supply Officer, Chief of the Supply Policy Branch, Deputy Chief of the Supply Division, Technical Advisor to Supply and Maintenance Division, and Deputy Director of Supply. He also served as a General Supply Officer, U.S. Army G4, Alaska, from 1954-1957. He was a Charter Member of the Senior Executive Service (SES) and retired at SES Level 4.

He earned his reputation for excellence as the principal proponent leader in every major supply system improvement in the Army. He was the key staff designer, developer, planner and initiator for the Direct Support System, the Air Line of Communications, the Logistics Intelligence File, the Automation of Retail Level of Supply, and the Army Field Stock Control System. He died on July 25, 1993.