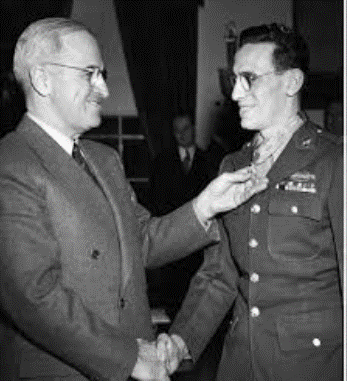 Master Sergeant Bertoldo was born and raised in Decatur, Illinois, and worked as a coal miner and truck driver. Though he was exempt from the World War II draft because of poor eyesight, he enlisted in the United States Army in 1942 and was approved for limited duty in the United States as a military cook. He then obtained approval to undergo training as an infantryman, and deployed to France with the 42nd Infantry Division. During Germany’s Operation Nordwind Offensive of December 1944 through January 1945, Master Sergeant Bertoldo was one of the Soldiers assigned to guard the command post for 1st Battalion, 242nd Infantry Regiment. When the battalion staff moved to an alternate location while expecting a German attack, Master Sergeant Bertoldo volunteered to cover them and defend the Command Post. On January 9th and 10th, 1945, he single-handedly fought off German assaults on the command post, and then continued the fight by taking part in the defense of the Battalion’s alternate Command Post. After the war, he was awarded the Medal of Honor for his heroism during this action. Following his military service, Master Sergeant Bertoldo moved to California and worked as a contact representative for the United States Veterans Administration before becoming the owner and operator of a successful landscaping business. He was diagnosed with cancer in 1966 and died at the VA hospital in Martinez, California. Master Sergeant Vito Bertoldo is buried at the Golden Gate National Cemetery in San Bruno, California.