Back to List
President Ulysses S Grant
Class of 2018 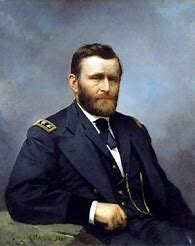 Born Hiram Ulysses Grant, in Point Pleasant, Ohio, Grant is arguably the most acclaimed Union general during the American Civil War and was twice elected President. Grant graduated from West Point June 30, 1843, and ranked twenty-first out of thirty-nine cadets.  His first assignment took him to the 4th Infantry Regiment as the regimental quartermaster, managing supplies and equipment. During the Mexican American War, Grant served as a Quartermaster managing supply trains and transportation in a hostile environment. He understood the importance of supply and logistics, but did not like to be left behind with the mules and equipment during the fighting. Grant on several occasions, moved from his Quartermaster post in the rear to the front with the cavalry and infantry to participate in the fighting in places such as Palo Alto, Resaca de la Palma, and most notably in the battle of Monterrey in 1846.

During the American Civil War, Grant made his combat reputation at Cairo, Illinois, which was the confluence of the Ohio and Mississippi Rivers. Grant understood rivers were the lifeline of the country and the Army that controlled them had an unfettered supply line to Cairo, and from there rail lines to St. Louis and Chicago that could deliver troops, material, medical, and food. Fort Henry and Fort Donaldson were Grant’s first major victories, capturing 12,000 POWs. This is where he cemented his reputation as “Unconditional Surrender” Grant.

Grant’s hard-won victory at Vicksburg, Mississippi, in May of 1863 was a strategic masterpiece. After the Confederate defeat at Chattanooga, President Lincoln promoted Grant to the special regular Army rank of General-in-chief (Lieutenant General), authorized by Congress on March 2, 1864. This rank was previously been awarded only two other times. A full rank to George Washington and a Brevet rank to Winfield Scott. Grant oversaw the Overland Campaign, the siege of Petersburg and accepted the Army of Northern Virginia’s surrender from General Robert E. Lee at Appomattox April 9, 1865.

After the Civil War, President Andrew Johnson named Grant Secretary of War over the newly reunited nation. In 1868, running against Johnson, Ulysses S. Grant was elected the 18th President of the United States. As president, Grant brought in civil right laws to fight the Ku Klux Klan, which included stopping violence incited and perpetrated by this domestic terrorist group. Grant also facilitated the Fifteenth Amendment to ensure that African Americans had voting rights and supported the Civil Rights Acts of 1870 and 1875, which guaranteed equal rights for Black Americans 82 years before the next Civil Rights Act in 1957.