Back to List
SGM John C. Marigliano
Class of 1992 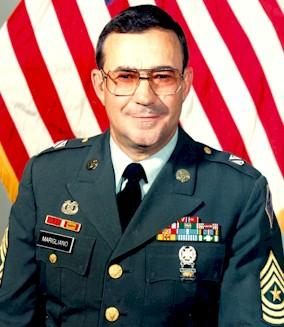 Sergeant Major Marigliano, a native of Brooklyn, New York, entered the U.S. Army Reserve in March 1952, during the height of the Korean Conflict, and was called to active duty one year later.  After a tour with the 30th Infantry Regiment, he was reclassified as a pipeline engineer and assigned to the 523d Engineer Company (Pipeline) which was attached to the 1st Marine Air Wing, Republic of Korea.

His assignments to Quartermaster units began with the transfer of pipeline proponency to the Quartermaster Corps in 1955.  Drawing upon his wide background in pipeline and tank farm construction, Sergeant Major Marigliano applied his skills in operating and maintaining pipelines throughout the military.  In addition to Korea, his overseas duty took him to Okinawa and Vietnam.  He also served four tours with the Quartermaster School’s Petroleum and Water Department.

After retiring in 1980, Sergeant Major Marigliano became a site manager for the Department of Energy’s Strategic Petroleum Reserve in Freeport, Texas.  He later relocated to Virginia and at the time of induction served as a senior military analyst with the Directorate of Combat Developments, U.S. Army Quartermaster School.  In recognition of his unparalleled knowledge and experience with liquid logistics, he held the position of TRADOC Project Officer for field water supply; and in that position served with distinction on key exercises such as Bright Star and Gallant Eagle, and Operation Desert Storm.  In further recognition of his lifelong contribution to the Quartermaster Corps, Sergeant Major Marigliano also has served as Honorary Sergeant Major of the Quartermaster Regiment.