Back to List
SGM Michael J. Terry
Class of 2017 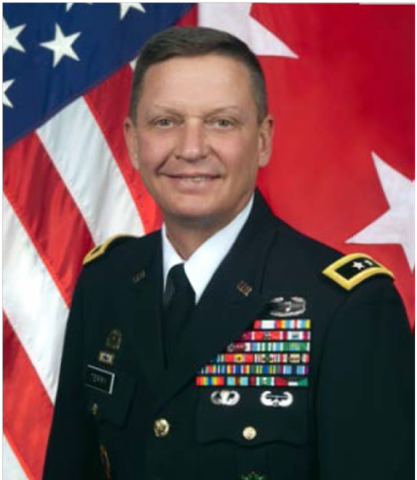 Major General Terry was commissioned in 1979 thru the Reserve Officer’s Training Corps at the University of Scranton. His early assignments include: Property Book Officer, Subsistence Supply Officer in 25th Infantry Division, and Aide de Camp to the Commanding General, Defense Personnel Support Center. As a captain he served three years in the Division Support Command, 3rd Infantry Division to include commanding Alpha Company, 4th Main Support Battalion. After Command and General Staff College, he served on staff in J-4/7 United States Central Command at both MacDill Air Force Base and during OPERATION DESERT SHIELD/DESERT STORM in Kuwait. Later he served as the Main Support Battalion Operations Officer and the Division Support Command Executive Officer in the 1st Infantry Division in Germany. He then commanded the Support Squadron of the 3rd Armored Cavalry Regiment, Fort Carson. Following the Naval War College, he served as the Chief of Logistics Operations and Deputy Director of J-4 US European Command. He then assumed command of the 64th Support Group, 13th Corps Support Command, III Corps, Fort Hood and deployed with his group to OPERATION IRAQI FREEDOM. On his return stateside, he became the Assistant Division Commander (Support), 7th Infantry Division at Fort Carson as a Colonel. A year later, as a Colonel, he was assigned as the Army Staff as the Director of Plans, Operations, and Readiness, Office of the G-4 (normally a 2 star billet). Following promotion to Brigadier General, he returned to Fort Hood to assume command of the 13th Sustainment Command (Expeditionary). Following humanitarian relief after Hurricanes Katrina and Rita, the 13th Sustainment Command deployed to OPERATION IRAQI FREEDOM (The Surge). His last three assignments (all command billets) were: The US Army Security Assistance Command, the 8th Theater Sustainment Command, United States Army Pacific Command, and The United States Army Tank-Automotive/Armaments Command.