Back to List
SGM Steven L. Peterson
Class of 2017 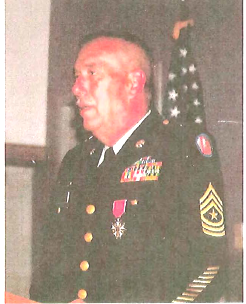 Sergeant Major Peterson contributions to the logistical readiness of the Utah National Guard is without equal and exemplified the values of the Army and the Quartermaster Corps. Sergeant Major Peterson served the Utah National Guard for over 40 years in positions of increasing responsibility, culminating in his exceptional service as the Chief of Supply and Services Branch at the Utah National Guard Headquarters. Sergeant Major Peterson’s most enduring contribution to the Quartermaster Corps is the excellence of the Soldiers he mentored and the leadership and organizational abilities he provided. During the Army transformation initiative, with a very small staff, he organized and conducted an unprecedented number of equipment fielding and corresponding equipment turn-in projects; the task was accomplished accurately and efficiently without error in accountability. In 2002, when Utah hosted the Winter Olympic Games, Sergeant Major Peterson and his team coordinated logistics support for several thousand Soldiers from across the nation who were assigned to provide security at multiple venues spanning hundreds of miles around the state of Utah. His leadership was key to the success of this operation.

Sergeant Major Peterson served as the Chief Supply and Service NCO G-4, Operations Sergeant, and Supply Sergeant, Headquarters Utah State Area Command, from November 1966 until December 2006. During this time he initiated the command supply discipline program in the Utah Army National Guard. This initiative led to better accounting of sets, kits, and outfits, record management of fuel, ammunition issue and residue, rations issued, and even helped identify if vaccinations were being properly accounted for.

Sergeant Major Peterson’s leadership was critical in supply and property management and proved vital after the attacks on September 11, 2001. After that incident, he assisted each of the National Guard Unit’s stationed in Utah during their deployment in support of combat operations until he retired in 2006.