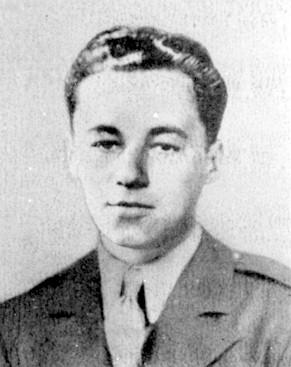 Tech 5 Gibson was born in Nysund, Sweden, grew up in Chicago, and was a Quartermaster Soldier serving as a Company Cook with the 30th Infantry Regiment in World War II. He participated in the Allied invasion of Sicily, the Anzio Beach landing, and subsequent drive up the Italian peninsula.

On 28 January 1944, near the village of Isola Bella, Italy, Tech 5 Gibson’s India Company came under withering enemy attack. He mobilized a tiny squad of replacements to rush out and secure the unit’s right flank – and in so doing, destroyed four enemy positions, killing five and capturing two Germans. He then went out a full 50 meters in front of the squad, and running, leaping, and dodging automatic weapons fire, he single-handedly knocked out another position with his machine pistol.

Tech 5 Gibson continued moving toward other bunkers firing a submachine gun with almost every step forward, as enemy artillery began to zero in on his position. Refusing to stop his advance, he crawled the last 125 meters right through a concentrated artillery and small arms barrage, and dropped two hand grenades into a German machine-gun emplacement – killing two more and wounding another. And was in one final face-to-face engagement when he was mortally wounded. For his conspicuous gallantry and courage under fire, First Cook Eric Gibson was posthumously awarded the Medal of Honor.

Rank and organization. Technician Fifth Grade, U.S. Army, 3rd Infantry Division. Place and date: Near Isola Bella, Italy, 28 January 1944. Entered service at: Chicago, Ill. Birth: Nysund, Sweden. G.O. No.: 74, 11 September 1944. Citation: For conspicuous gallantry and intrepidity at risk of life above and beyond the call of duty. On 28 January 1944, near Isola Bella, Italy, Tech. 5th Grade Gibson, company cook, led a squad of replacements through their initial baptism of fire, destroyed four enemy positions, killed 5 and captured 2 German soldiers, and secured the left flank of his company during an attack on a strongpoint. Placing himself 50 yards in front of his new men, Gibson advanced down the wide stream ditch known as the Fossa Femminamorta, keeping pace with the advance of his company. An enemy soldier allowed Tech. 5th Grade Gibson to come within 20 yards of his concealed position and then opened fire on him with a machine pistol. Despite the stream of automatic fire which barely missed him, Gibson charged the position, firing his submachine gun every few steps. Reaching the position, Gibson fired pointblank at his opponent, killing him. An artillery concentration fell in and around the ditch; the concussion from one shell knocked him flat. As he got to his feet Gibson was fired on by two soldiers armed with a machine pistol and a rifle from a position only 75 yards distant. Gibson immediately raced toward the foe. Halfway to the position a machinegun opened fire on him. Bullets came within inches of his body, yet Gibson never paused in his forward movement. He killed one and captured the other soldier. Shortly after, when he was fired upon by a heavy machinegun 200 yards down the ditch, Gibson crawled back to his squad and ordered it to lay down a base of fire while he flanked the emplacement. Despite all warning, Gibson crawled 125 yards through an artillery concentration and the cross fire of 2 machineguns which showered dirt over his body, threw 2 hand grenades into the emplacement and charged it with his submachine gun, killing 2 of the enemy and capturing a third. Before leading his men around a bend in the stream ditch, Gibson went forward alone to reconnoiter. Hearing an exchange of machine pistol and submachine gun fire, Gibson’s squad went forward to find that its leader had run 35 yards toward an outpost, killed the machine pistol man, and had himself been killed while firing at the Germans.

Gibson was inducted into the Quartermaster Hall of Fame in 1999.

The NCO Academy Dining Facility on Fort Lee, Building 3003 on B Ave, is named Gibson Hall in honor of Tech 5 Gibson.

On 13 February 1995, the Army Chief of Staff, General Gordon R. Sullivan unveiled the ship’s bell and name board for a container ship.  This ship, formerly the freighter Sea Wolf, was renamed as the SP5 Eric G Gibson (AK 5091). The ship, chartered by the Navy and owned by a private firm, is in the Army Prepositioned fleet in the Pacific where it is a key element in U.S. strategic mobility capability. It contains sustainment cargo including MREs, lubricants, medical supplies, repair parts and chemical defense equipment.

Gibson’s name (as well as those of all Medal of Honor recipients) was included by NASA in a microchip aboard the Stardust spacecraft. The Stardust mission was launched into space in early February 1999. Its destination – Comet Wild 2, its mission, to capture cometary materials before returning to earth in 2006.